IN DEPTH: New food diversity at the West Side Bazaar 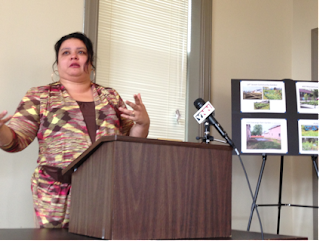 Jennifer Mecozzi, organizing director of PUSH Buffalo, right, tears up while discussing the improvements in store for West Side neighborhoods at a press conference held March 13 to announce the expansion of the Green Infrastructure project. PUSH Buffalo, along with the U.S. Environmental Protection Agency and Buffalo Niagara Riverkeeper, will promote green infrastructure and storm water management in the green development zone,  a 25-square block area of the West Side. PUSH plans on completing 25 projects over the next two years to create green jobs in the neighborhood and to address problems with sewer overflows that are already at capacity. 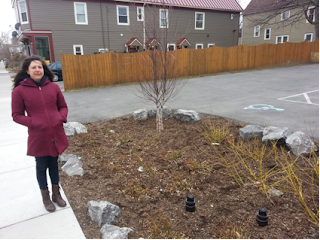 Jenifer Kaminsky, director of housing for PUSH, left, stands next to an overflow rain garden on Massachusetts Avenue, one of four on the West Side. The project will serve as the model for other cities across the country, said Judith Enck, EPA Region 2 regional administrator. According to EPA, green infrastructure is the "patchwork of natural areas that provide habitat, flood protection, cleaner air and cleaner water." Photos by Aaron Garland, Brandon Schlager, Bryan Price and Nick Stutzman.

Posted by Bengal News Editor at 7:21 AM


West Side Community Services is supported through public funding from the City of Buffalo Youth Bureau, Erie County Department of Mental Health and from corporate and private associates.

IN DEPTH: Laundromat offers much more than a chore

The Westside Value Laundromat adds a little culture to the wash.  Full story by Jasmine Peterson and Maria Yankova.
Posted by Bengal News Editor at 2:36 PM

With the help of the City of Buffalo,  PUSH Buffalo  and the West Side community were able to focus their efforts on the redevelopment of the city-owned Massachusetts Avenue Park. In September 2012, construction on Phase II of the plan began, with hopes of a spring 2013 completion. However, the completion of Phase II has been pushed back, due to inclement weather conditions. Full story by Malniquia Evans and Janiel Thomas.
Posted by Bengal News Editor at 6:24 AM


ASSISTING IMMIGRANTS - Dr. Gary Welborn, sociology professor at Buffalo State, is working with the Buffalo Immigration and Refugee Empowerment Coalition (BIREC), and other educators to reach out to the refugee community and some of the biggest issues facing immigrant refugees coming into the West Side. Dr. Welborn is  assisting BIREC to give the organization a larger presence in the community. BIREC holds a meeting on the second Saturday of each month at the YWCA on Grant Street to discuss topics such as higher education, public safety, immigration, housing, employment and health care.Video By Nick Stutzman and Bryan Price.
Posted by Bengal News Editor at 6:21 AM

By Anika Rawlins and A.J. Speier


The Horsefeathers Market & Residences will be adding three year-round food vendors to its commercial floor by April 1.
The three that will make up the Food Maker’s Market are Martin Cooks Restaurant, Press Raw Food & Juice and Pasta Peddler. These vendors are just three of the 12 currently providing samples of foods at the Winter Market, located at 346 Connecticut St.
Martin Danilowicz, vendor and owner of the personal chef business - Martin Cooks, has been providing food samples at the Horsefeathers Community Market since Jan. 5.
Upon opening his eatery Danilowicz will operate a bar in the Food Maker’s Market, acting as the primary chef and server of the bar.
“There’s no table service, just all bar service. Every night I’ll do between a five and a 10-course meal for 12 people. It’s an open kitchen and the menu will change every week, so whatever I can find for the bar table, that’s what I’ll cook,” Danilowicz said.
Aside from opening the Food Maker’s Market, Karl Frizlen, president of The Frizlen Group, will soon be leasing 24 apartments for rent in the Horsefeathers Market & Residences.
“We are about 75 percent complete with the entire project. Here on the commercial floor, we are about 90 percent complete. This is basically just to promote the building and get people into the building. We’re promoting the space to potential tenants,” Frizlen said.
The Winter Market will continue to run from 9 a.m. until 1 p.m., every Saturday through May 4.

Posted by Bengal News Editor at 5:45 AM

IN DEPTH: Lucy brews up tradition on Amherst Street


The husband and wife team of Abba Biya and Naima Tesfu,  co-owners of Lucy Ethiopian Restaurant,  decided the traditional coffee ceremony would be an automatic when the business opened on the corner of Amherst and Grant streets last March.  Full story by Michael Mazzuto and Mike Provenzano
Posted by Bengal News Editor at 5:37 PM

IN DEPTH: Asarese, hockey matter to West Side youth

Ottavino “Tovie” Asarese, 84, is the founder and commissioner of the West Side Play Area Street Hockey League on Rees Street, where he’s been involved in amateur and youth sports for over 50 years. Full story by Anthony Howard and Lars Lewis
Posted by Bengal News Editor at 11:01 AM 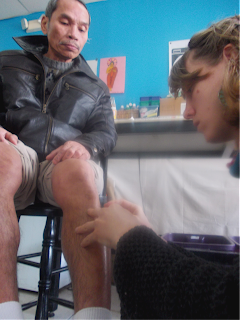 WON'T HURT A BIT -  Dr. Toni Haugen gives West Side resident, Kyu Kyu, acupuncture to his knees as part of the WASH Project’s newest program at Westside Value Laundromat, 417 Massachusetts Ave.  The WASH Project, a social and education program that caters to immigrants, offers free acupuncture between 9 a.m. and 11 a.m. on Fridays. Photo by Adrienne Boudreau and Caitline Kupiec
Posted by Bengal News Editor at 6:19 AM 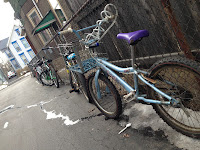 Westside Wheels, providing teenagers and young adults with job skills and a chance at a better life since 2005, is about to expand. Full story by Aaron Garland and Brandon Schlager 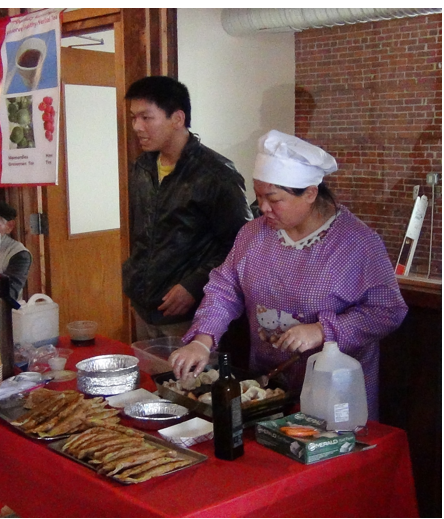 EAST MEETS WEST: Jolie Zhou and her son Mike Huang, of  Jolie’s Traditional Chinese Food Inc.,  prepare genuine Chinese food at Horsefeathers Community Market on a recent Saturday. The mother and son team is opening an authentic Chinese food stand on March 15 in the West Side Bazaar located at 25 Grant St. Zhou says she makes  authentically Chinese fare with no food coloring, and that's not fried or greasy. Photo by Anika Rawlins and A.J. Speier
Posted by Bengal News Editor at 7:57 AM

By Janiel Thomas and Malniquia Evans
BengalNews Reporters
PUSH Green, the community-based energy efficiency arm of PUSH Buffalo, has a new office location. The office is now on the second floor of 271 Grant St.
The PUSH Green organization, which focuses on reducing household energy burdens and creating jobs for the West Side is PUSH Buffalo’s newest initiative.
PUSH Green started as one of the few entities in Western New York to administer energy efficiency. The organization caters to individuals of different income levels, providing free weatherization for houses on the West Side.
“We want to make sure that the community knows about them. PUSH Buffalo is a non-profit organization and it’s pretty well-known, but a lot of people didn’t know we had an arm dedicated towards energy efficiency programs,” said Lonnie Barlow, Communications Coordinator at PUSH Buffalo. “We had recently gone through some staff changes, so we felt they needed the room to grow.”
The move displaced members of PUSH Buffalo’s organizing team and members of the administrative department, who now have office locations on the first floor of 271 Grant St. and PUSH Green’s old location, 456 Massachusetts Ave.
Executive Director, Aaron Bartley and Buffalo Neighborhood Stabilization Company Housing Director, Jenifer Kaminsky, along with the aforementioned Barlow have moved to the office on Massachusetts Avenue.
According to Organizing Director, Jennifer Mecozzi, the move took place on Feb. 22.
Posted by Bengal News Editor at 7:28 AM 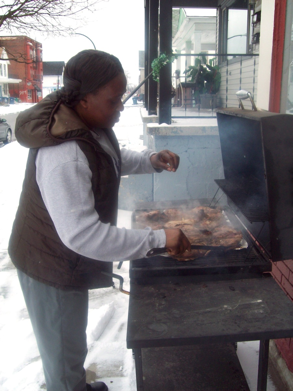 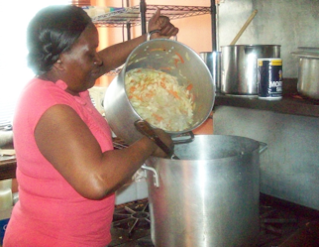 ‘MAKEOVER’ MAMA COOKS — Above, Delores Powell, owner of Mama’s Kitchen at 209 Massachusetts Ave., isn’t afraid to grill outside in the winter snow as she prepares her popular jerk chicken for a recent Sunday rush. At right, she steams the cabbage to accompany her Caribbean cuisine inside the more comfortable confines of her new kitchen. Powell and her family appeared on “Extreme Makeover: Home Edition” in January 2010. With the grand opening of Mama’s Kitchen on Feb. 24, Powell’s dream of opening a Jamaican restaurant was realized directly across the street from her new home.  By Brielynn Bell and Margot Harris
Posted by Bengal News Editor at 5:56 AM

The Western New York Hispanic-American Veterans Memorial Committee is overseeing the completion of the Hispanic-American Veterans Monument being built in Naval Park.
The monument will pay tribute to the living and fallen Hispanic veterans in the Western New York area. People will be able to visit the site and learn about the Hispanic veterans who fought in World War I, World War II, and the Korean War.
The committee hopes to raise $225,000 in donations. As of Jan. 24 the committee has raised $42,758.
“We need to let people know, the city know, the world know, what they did for us, they risked their lives, people don’t know that,” Dinorah Santos, committee secretary said.
Santos’s son is  active in the Air Force.
The project has received support from businesses and local councilmen, who will also be honored on the site.
The committee plans to debut the Hispanic American Veteran’s Monument on Memorial Day.
The committee was formed in 2011 made up of Hispanic-American veterans from the area.
They meet once a month at the Belle Center on Maryland Avenue to discuss the progress, funding, and other initiatives to build the monument.
Posted by Bengal News Editor at 6:27 PM