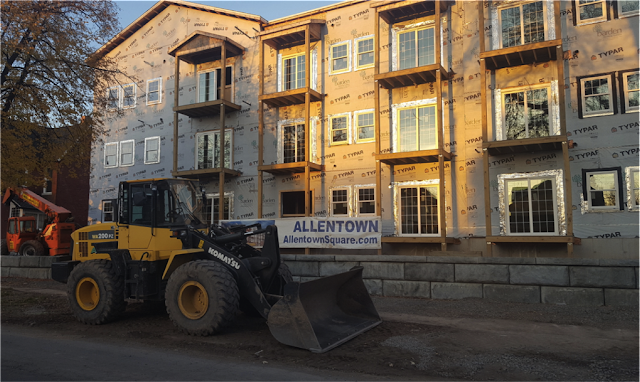 Allentown Square, located at 295 Maryland St. at West Avenue, has postponed opening its doors this month. “The problem is funding. My guys work hard but it’s a slow game when it comes to projects like these,” Robert Neagle, construction manager of Allentown Square said. “The project is going up pretty fast but the manpower isn’t there.” In order for the complex to open this month as scheduled, twice the manpower would have been needed, according to Neagle. The 54-apartment, $7 million project will now likely be ready in March 2017. By Franklin Hagler and Matt Neidhart
Posted by Bengal News Editor at 6:22 PM

Music is center of ‘note’-worthy therapy


The Community Music School of Buffalo, 415 Elmwood Ave., doesn’t only teach music; it also uses music to heal as part of its music therapy program. Music therapy is a unique mental health treatment where the participants listen to and play music. The two music therapists on staff, Brianna Miller and Sara Rogers, say they treat a wide variety of people from autistic children to elderly dementia patients. However, Miller and Rogers said that they often feel the profession is not treated seriously. “Music therapy is so much more than just someone playing therapeutic music for someone,” Rogers said. She added that practitioners must be board certified and prospective patients must be evaluated before a treatment plan can be developed. Patients can either be referred or can contact the music school directly to assess whether music therapy can benefit them. For more information visit http://communitymusicbuffalo.org/home/programs/music-therapy/  By Melissa Burrowes
Posted by Bengal News Editor at 6:41 PM

Many know the excitement of Allentown, but not the history.
On Dec. 11, visitors will step inside the private homes of Allentown’s National Historic District for the Secrets of Allentown Holiday Tour of Homes. The self-guided tour will bring visitors into homes from the 1800s that are fully decorated for Christmas.
Allentown Association President Jonathan White said this is the first time in several years the tour is being held.
“We thought that it would be a perfect way to integrate the Allentown community and the Western New York community for that shared common bond that people have around their love of family and their love of things for the holiday,” White said.
White said guests will receive a special booklet with the locations of each home. Without the booklet, guests will not know which houses are part of the tour.
“The tour booklet will include the wonderful artwork, which is a line drawing of each property, that we’ve specially commissioned for the booklet and then a description of each house,” White said. “You learn a little bit about the house and the home owner before you get there.”
The tour’s starting point is the Theodore Roosevelt Inaugural National Historic Site, 641 Delaware Ave., where a Victorian holiday event will be taking place. Guests can tour the first floor, including the library where Roosevelt was sworn into office.
The tour will run from noon to 4 p.m., with start times at noon and 2 p.m. Tickets are $35 for the general public and can be purchased at allentown.org. By Patrick Koster and Dave DeLuca

Posted by Bengal News Editor at 7:05 AM

Every child deserves to feel the magical moment of opening a present early Christmas morning. With the help of Buffalo Dream Center, many children can experience that pure happiness.
The Buffalo Dream Center’s Boxes of Love project helps out families in need with a wrapped Christmas gift for each child and a bag of nonperishable food. Distribution this year will be on Dec. 10, said Eric Johns, Dream Center pastor.
Buffalo Dream Center, an outreach Christian ministry in the inner city, is signing up volunteers to wrap gifts at its 318 Breckenridge St. headquarters. More than 1,000 volunteers have signed up in recent years.
“The week after Thanksgiving, volunteers start to come in and help wrap the gifts for the community,” Johns said.
Pastor Johns spends the week of Thanksgiving living with the homeless using the opportunity to spread the word among the streets.
Its Boxes of Love project began in 1999 assisting a few families with Christmas toys and bag of groceries but over the years has assisted 3,000 families and 5,000 children. By Tiera Daughtry and Vincent Nguyen
Posted by Bengal News Editor at 7:48 AM

Immigrants may be unaware of diabetes risk

Paula Paradise, owner of Paradise Wine, gives her suggestions for pairing wines with your favorite Thanksgiving foods. The self-acclaimed specialist in pairing wine with food offers over 450 all-organic wines at her location on 435 Rhode Island St. Paradise and her business partner Lauren Kostek offer classes in wine tasting every week. By Franklin Hagler and Matt Neidhart
Posted by Bengal News Editor at 8:08 AM 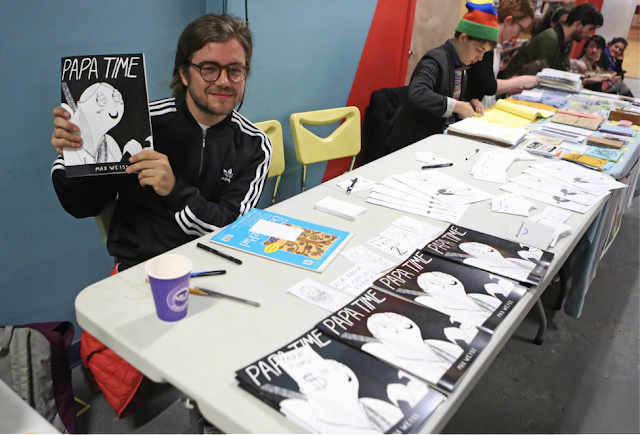 Max Weiss of Niagara Street holds up a copy of his first graphic novel, “Papa Time,” at the Buffalo Zine Fair on Nov. 12. The novel was published recently by Hypnotic Dog Press, a local independent publisher. With the rise of digital media, the event aimed to promote old-fashioned publishing, using the slogan, “Print media is not dead.” The event drew more than 25 independent publishers from Buffalo, Rochester and Syracuse. Publishers brought their “zines,” which are self-published, non-commercial booklets or magazines made for small-scale circulation. Some publishers are self-funding their zines, others use crowd-sourcing. Buffalo Zine Fair lasted seven hours and was held at Sugar City at 1239 Niagara St. It was presented by Sugar City and West Side comic book store Gutter Pop Comics. By Dave DeLuca and Patrick Koster
Posted by Bengal News Editor at 9:12 AM


Friends of Night People, 394 Hudson St., is preparing for its annual Thanksgiving dinner. Executive Director, Joseph Heary, says the organization is planning a full Thanksgiving meal with traditional turkey and stuffing to pumpkin pie on extra large plates. Its main priority is offering a comforting meal to people in need. Additionally, Friends of Night People serves hot meals daily, provides warm clothing in the fall and winter and offers medical help year-round. All services are provided free of charge to men, women and children of all ages. By Tiera Daughtry and Vincent Nguyen
Posted by Bengal News Editor at 6:41 AM 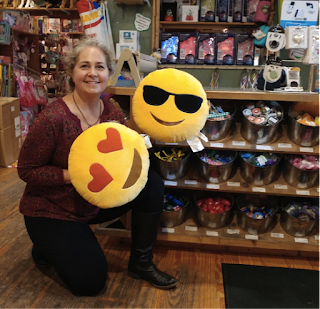 The TreeHouse Toy Store is one of many Elmwood Village businesses preparing for Small Business Saturday on Nov. 26. Co-owner Gaetana Schueckler has run the business at 793 Elmwood Ave. with her husband David for 20 years. The store offers complimentary gift wrap, asks fun trivia questions and gives  free locally made caramel corn on that day, all special things the store does on that Saturday to get customers in the holiday spirit. The store continues to offer its range of playthings from the selection of $4.99 items to the unusual, difficult-to-find toys that are available year-round, Schueckler says. “We don’t want our customers to have to jump through hoops to come in on a special day or a special time to get a different price,” she said. “We try to help them pick the right toy, be the toy expert. We do the heavy lifting so they don’t have to wrack their brains trying to find the perfect toy. That’s our job.” By Anthony Callens and Benjamin Joe

By Franklin Hagler and Matthew Neidhart
Bengal News West Reporters
Try walking through the hallways at Lafayette High School and finding the bathroom.
You don’t see the traditional sign marking the room; it even lacks the symbol that would normally be seen as male or female.
At Lafayette every room is labeled with a sign that shows what that room is in six different languages. The multi-linguistic paper signs can be deceiving in appearance.
“Half of our population is African, from Central or East Africa, we have Arabic kids, a big population of the Burmese speaking and Korean community. The other 50 percent are from Puerto Rico and speak Spanish,” Lafayette Principal John Starkey said.
Buffalo is the most linguistically diverse place in New York State according to Buffalo Public Schools officials. Over 84 languages are represented in local communities, and with the influx of refugees on the West Side that can grow. This is causing a change in the way that teachers and the Department of Education are approaching education and Lafayette High School has become ground zero for this experiment.
Working with Dr. Fatima Morrell, assistant superintendent for curriculum and Mrs. Nadia Nashir, assistant superintendent for multilingual education, Principal Starkey has helped install changes in the way teachers speak to students from different cultures, create a Parent Center for everyone in the community and make tangible changes to the textbooks and resources available to all students.
“Students learn better when they see themselves and their history and culture represented in the curriculum,” Dr. Morrell said. “We want to create a warm and welcoming environment for our parents and students and make them feel appreciated.”

Lafayette High is not set up as a traditional school, as there are three distinct schools housed in this one building. Lafayette Proper School 204 has an 11th and 12th grade class. “Phase-Out” is what it is being called as the junior class will be the last set of students under that school.
Lafayette Phase-In School 207 is a new program that was started by Starkey. This school has just a ninth grade, 100 of the new freshmen have been in the country for four years or less.
The last school is Newcomers Academy that has grades 7-12 and nearly 300 students. This academy is mostly made up of Students with Interrupted Formal Education or SIFE students.
“We have students coming from war torn countries or impoverished conditions so they are coming with a lot of socio-emotional needs and so we can’t just look at the academic support for them but look at the comprehensive support for them,” Starkey said.
Eighty percent of the students in Buffalo public schools come from poverty,  which is why community schooling and building relationships with the families has become so important.
“If we truly want to improve student learning we have to improve adult learning, ” Mrs. Nashir said.
Her department has hired six cultural research specialists that are holding workshops for teachers and parents. This month they plan on training 150 teachers and by June they want all teachers to be trained.


“In the multilingual department we understand that many of our teachers have not had an English language learner in front of them,” Nashir said. “ The ecology has to speak to our students.”
Posted by Bengal News Editor at 11:22 AM


Pierogi-making runs in the family for Andy Ruszczyk, who is now bringing a few of his grandmother’s recipes to the West Side. Ru’s Pierogi, a restaurant at 295 Niagara St., opened last month, complete with a bar and a food truck. Ruszczyk plans on using the restaurant's large-scale kitchen in the back to produce pierogi and distribute along the East Coast. The restaurant, managed by Rob Rush, is one of the only places on the West Side specializing in pierogi and other Polish favorites. Customers enter a laid-back atmosphere where they can dine in or take their orders to go. While waiting for orders, customers can watch their food being made. Ru’s is open 11 a.m. to 10 p.m. Monday through Thursday and 11 a.m. to 11 p.m. on Friday and Saturday. By Dave DeLuca and Patrick Koster
Posted by Bengal News Editor at 5:59 PM

Airbnb law not coming to Buffalo - yet