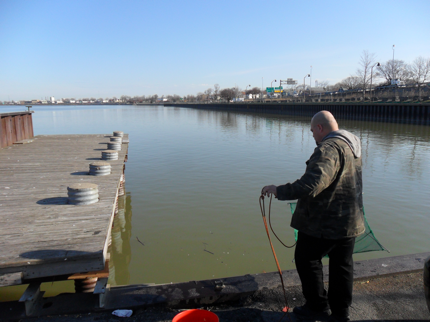 Buffalo resident Jerry Zeughardt fishes for minnows along the docks of the lower Niagara River on a recent early spring morning in preparation for the upcoming fishing season. The minnows caught are called silver shiners and can be found at popular West Side fishing spots like the one at the foot of Ferry Street. By Anthony Howard and Lars Lewis
Posted by Bengal News Editor at 6:30 PM

The West Side is becoming a popular location for homebuyers because of affordable housing and the rehabilitation of neighborhoods.
That’s according to Laura Sweat, deputy director of West Side and Black Rock-Riverside Neighborhood Housing Services. The organization’s records show that the number of homeowners it created last year doubled 2011’s numbers.
Sweat’s service was among many other groups that attended the West Side Housing Partnership Annual Housing Fair April 13  at the Loretto Ministry Center on 301 14th St. The event was hosted by Heart of the City Neighborhoods, Inc.
About a dozen organizations including PUSH Green, Americorps Opportunity Corps and HomeFront Inc. participated in the fair to aid people in their pursuit of buying a house on the West Side.
Sweat believes organizations like the ones  at the event are the reason for the increasing appeal of purchasing a home on the West Side. Her organization’s goal is to preserve and revitalize Buffalo’s neighborhoods by providing safe, affordable and sustainable housing opportunities for people interested in purchasing houses.
“The West Side Housing Partnership is full of groups that work closely with residents,” Sweat said. “They’re very engaged and are starting to do stuff that people are noticing to bring back the West Side.”
Jennifer Yuhnke, Heart of the City development coordinator, said her organization collaborates with the diverse organizations that support similar causes.
“We meet once a month, exchange information and try to figure out ways to reach out to the West Side residents better,” Yuhnke said. “Residents need to know that there are some quality, affordable houses in the West Side.”
Posted by Bengal News Editor at 6:22 PM 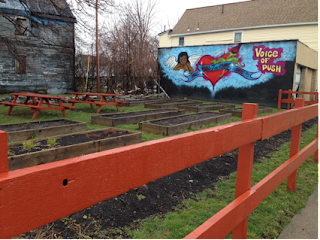 By Malniquia Evans and Janiel Thomas
Bengal News Reporters
Students from four West Side schools took advantage of the Say Yes to Education Buffalo’s first scholarship application deadline, April 1.
Students from Hutchinson Central Technical High, Lafayette High, Tapestry and Oracle Charter Schools were among the 1,399 students who completed and submitted applications. Fully, 1,593 students were eligible for the program.
According to David Rust, executive director of Say Yes Buffalo, public school students have embraced the program and many have completed the application.
“We have applications for all but about 100 public school students, which is really exciting,” said Rust.
Say Yes Buffalo allows graduating seniors who attend Buffalo public and charter schools to receive a scholarship, which will cover tuition to attend an accredited university or college. Among the participating colleges are Buffalo State College and D’Youville College.
The requirements to receive the scholarships are to graduate from high school, be accepted into a SUNY/CUNY school or a listed private school and be eligible for financial aid. In addition, the student must enroll full-time at a participating college within one year of their high school graduation.
According to the Say Yes Buffalo website, the tuition scholarship amount is determined by the number of consecutive years a student has attended a Buffalo public or charter school. If a student attends a Buffalo public or charter school from kindergarten through 12th grade, 100 percent of their tuition cost will be covered.
According to Rust, Say Yes scholarships are locally funded.
“So far we’ve had over 70 local donors who give money for the scholarship and we raised over $18.4 million, which is exciting,” said Rust. “Our initial goal is to raise $30 million, which would allow the scholarships to go on for at least 10 years.”

Posted by Bengal News Editor at 5:54 AM