Dining Out for Life scheduled for Oct. 9 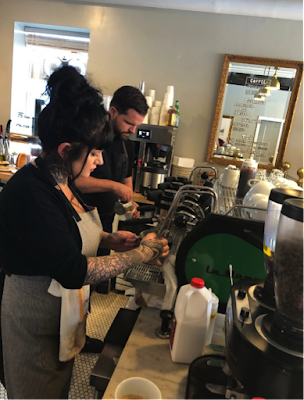 Remedy House, 429 Rhode Island St., where barista Ariel Brucato and co-owner Andrew Trautman recently prepped orders, is one of several West Side cafes and restaurants that will be taking part in the 16th annual Dining Out For Life event on Oct. 9. Sponsored by KeyBank, Dining Out for Life is one of the Evergreen Health’s key fundraising events. Participating establishments will donate up to 50 percent of proceeds the day of the event. More than $1 million has been raised through Dining Out for Life for HIV/AIDS research and services since 1983. By Michael Gibas and Olimpcia Desamour

Double Up Food Bucks proving to be popular


At the Elmwood Village Farmers Market, lower income shoppers buy twice the amount of locally-grown produce using the Double Up Food Bucks program. The program matches SNAP benefits, formerly called food stamps, dollar to dollar exclusively for fruits and vegetables. Lisa Tucker French, co-founder and executive director of Field and Fork Network, the organization that expanded the program to Western New York, says it is a way to direct more federal money into the local food economy. Christina Fitzpatrick, a worker at Dan Tower Farm in Youngstown, says the farm’s vendor booth receives enough of the Double Up money to fill a bucket by the end of its shift every time at the Elmwood market. By Francesca Bond and Alex Silvia
Posted by Bengal News Editor at 12:43 PM

Mayor Byron Brown has teamed up with both the Housing Opportunities Made Equal (HOME) and Buffalo Urban Renewal Agency by going on the West Side with pamphlets to inform residents of their housing rights.
The pamphlets describe the Fair Housing act passed in 2006 that prevents discrimination against people for receiving government assistance, marital status, gender, religion and race among others. Housing advocates said these rights have not been heavily enforced by the city since the passing of the law.
The pamphlets also include information on how landlords can prevent discrimination on prospective tenants and their rights as a landlord.
The pamphlets state that any complaints made should be answered within 120 days of being filed.
Fair Housing Officer Harold Cardwell, Jr.  said that he can do no more then just tell residents of their rights.
“You can give the horse water,’ Cardwell said, “but you can’t make them drink.” By Kaylyn Padilla and Roshea Robinson

Gourmet Lao Foods, a popular Asian cuisine kiosk located at the West Side Bazaar, plans to open its first standalone restaurant on Grant Street in Campus Walk
The restaurant will be under operation of Boulivone Serixay and One Thammasithikoun, sisters from Laos. Serixay owns and operates the kiosk.
Originally scheduled to open on Sept. 10, the date was pushed back to complete renovations on the new addition.
Jim Swiezy, president of Greenleaf Development and Construction Co. which owns the Campus Walk complex, said the restaurant should be open the beginning of October.
“We want it to be a safe and welcoming area for students and residents,” Swiezy said.
Construction of the restaurant began with tables, beverage coolers and counters.
The business will be in addition to the improvement effort on the Grant Street side of the SUNY Buffalo State campus, which has seen an increase in new housing, the new Buffalo State alumni and visitor center, and Vinnie’s Pizza and Wings during the past year.
“We are seeing new life breathed into Grant Street,” Swiezy said. “We are at a great start and we consider it a success so far.”  By Louis DiBiase and Marcos Watkins
Posted by Bengal News Editor at 6:01 AM