The West Side in the 20th century had a very active mob scene and many of the Buffalo mob members lived, ran their businesses and engaged in feuds that often lead to deaths on the West Side.
To get a glimpse of what it was like to live in this area when the mob was active, Explore Buffalo offers a West Side Mob Tour that occurs twice a month from May through October. The tour is inspired by the book “Gangsters and Organized Crime in Buffalo,” by Mike Rizzo.
During the West Side Mob Tour, around 20-30 people are guided through a walking tour that starts at Providence Social on 490 Rhode Island St. Providence Social was previously called Romanello’s, which was the scene of one of Buffalo’s best-known mob killings.
“While the Buffalo mob was a relatively small group of people, its impact on the local community was significant,” said Brad Hahn, executive director of Explore Buffalo.
The two-hour tour goes through the West Side stopping at the locations of various homes and businesses where mob members were once found. The mob was particularly active on Connecticut and Rhode Island streets.
Hahn said these tours are given for people to understand the significance of the mob in Western New York and to get a sense of what life connected to the mob would have been like.
Not only are the tours given to show past mob activity, but to show the various businesses and community gardens flourishing on the West Side. Other tours given on the West Side besides the mob tour are of the Cottage District around Little Summer Street and Columbus Parkway near Columbus and Front parks.  By Jillian LeBlanc and Christina Stuart

Library on Wheels coming to the West Side 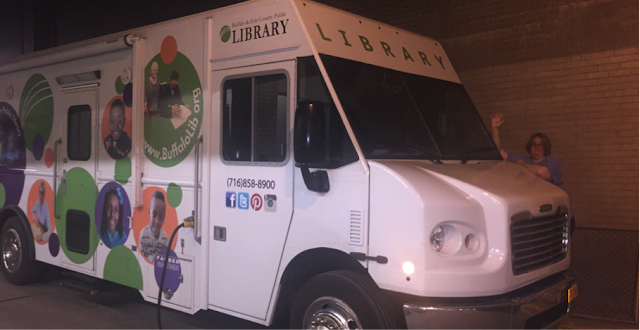 The Buffalo and Erie County Public Library is coming to the West Side. Melissa Blattner, a librarian for Library on Wheels, stands behind the Library on Wheels, a bookmobile that strives to deliver content all over Western New York. Blattner saw this as an opportunity to make content available to people of all ages in areas that may not have a library near them. People are able to check out books, movies and music, rent laptops and utilize free Wi-Fi all from the truck. The bookmobile will be located on the West Side from 10 a.m. to 12 p.m. on May 17 and June 21 at the Emerald Nursing and Rehabilitation Center on 1175 Delaware Ave. By Dan Carapetyan and Georgina Hallowell
Posted by Bengal News Editor at 5:48 PM

West Side bakery Breadhive all the buzz


Valerie Rettberg-Smith, an owner of Breadhive Bakery & Café at 402 Connecticut St., celebrates the expansion and success of the West Side business. By Jessica Freda and Meaghan Michel
Posted by Bengal News Editor at 4:46 PM

IN DEPTH: Bars, patrons do battle over fake IDs

In an effort to be able to go out with their older friends, underage college drinkers are attempting to find a way to get into bars without being the legal age. While some bars make it easy for underage drinkers to get in, other bars are not so willing to break the law. Full story by Jessica Freda and Meaghan Michel
Posted by Bengal News Editor at 7:06 PM