Unique restaurants, shops, art festivals and non-stop night life cover this less than a mile-long street that stretches from Main Street to Symphony Circle. Allen Street is the center of local art and nightlife on the West Side. Bar and clubs flood the section of Allen between Elmwood Avenue and Wadsworth Street leaving little to no room for other businesses. The Allentown Association’s Improvement Committee is an organization set in place to lead Allen Street’s return to a mixed-use environment. By Zachary Huk and Terrance Young


Employees at Santasiero’s, 1329 Niagara St., share concern over Gov. Andrew Cuomo’s proposal to eliminate the tip credit and raise hourly wages for servers. Cuomo says on his website that a raise in wages for employees reliant on tips to supplement their income will combat the significant fluctuation of wages from day to day that results in underpaid workers. The Department of Labor, led by Commissioner Roberta Reardon, began hearings to examine the issue of tip credits, with testimony from workers and businesses alike in March. The hearings will continue across the state until the end of June. John Brands Jr., head of operations at Santasiero’s, says that Cuomo’s proposal will hurt not only the bottom line for small businesses but will result in fewer jobs, because employee’s hourly wages will become unsustainable. “To supplement the wage, we’re going to have to increase our prices so we would see a drop off in business and probably need less servers,” Brands said. Santasiero’s waitress, Caitlyn Stein has years of experience working in the health care field and says that tips are more beneficial to her than a higher flat rate wage.  By Tara Hark and Max Wagner
Posted by Bengal News Editor at 2:37 PM

Big changes in the works for Allen Street 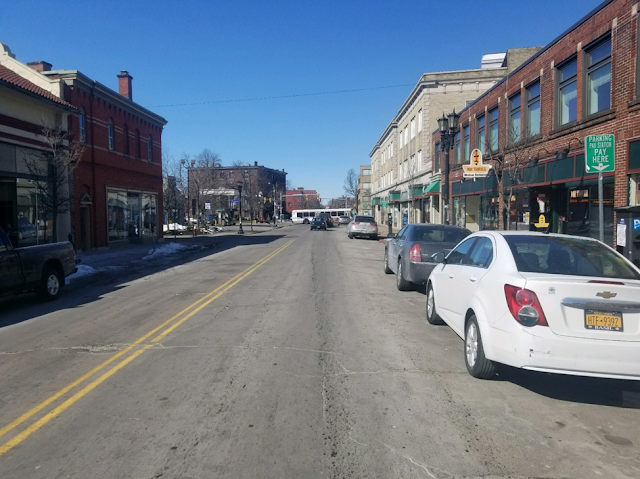 As part of a two-phase streetscape project, Allen Street will soon undergo major developments in the coming months. Jonathan White of Allentown Association calls it a "radical realization" of what Allentown can be. The first phase will stretch from Washington Street to Ellicott Street and the second phase will begin in 2019 on Main Street and extend to Wadsworth Street. Changes being made include the removal of sidewalk curbs, creating a pedestrian walking space level with the road.  New bike lanes will be added. Over 100 moveable bollards will be installed to accommodate high-traffic events such as the First Fridays, the Allentown Art Festival and the St. Patrick’s Day Parade. Mark McGovern, director of construction and infrastructure for the Buffalo Niagara Medical Campus said:.“This is different from past renovations because it is a federally funded streetscape project. They plan on doing a couple blocks this construction season.” By Terra Harter and Ben Hauver
Posted by Bengal News Editor at 3:28 PM

Residents surrounding the neighborhood on Forest Avenue have launched complaints about increased crime since the opening of Monarch 716, a 500-bed housing complex.
The nine-building complex located on 100 Forest Ave., opened in the summer of 2017 to serve college students and others.
Between Sept. 19, 2017 and March 18, 242 incidents have been reported, according to crimereports.com. Armed robberies, stabbings, and gun shots are the main crimes reported to the Buffalo police.
Neighbors complain of people loitering, playing loud music and the need for police calls on a weekly basis.
“I have lived here for 25 years and the value of this neighborhood has decreased since Monarch has arrived. I have two kids and I don’t feel comfortable with the amount of times the police are here and the amount of crimes I’ve seen reported in the news,” Sandra James, resident of Danforth Street, said.
Monarch 716 residents have tried to get out of their contracts due to the unsafe environment.
“Residents have complained lack of security and that has resulted in what we call apartment abandonment,” Savannah Morgan, Monarch 716 leasing agent said.
Many students signed up to live at the property from surrounding colleges including SUNY Buffalo State, Medaille and Canisius, although there are also non-student residents.  By Tiffany Channer and Kai Lewis