Many new business owners see Grant Street and its surrounding neighborhood as a blank canvas and a unique opportunity to forge a new path in an area. Full story by Sean Dwyer and Youleidy Vega
Posted by Bengal News Editor at 6:01 PM 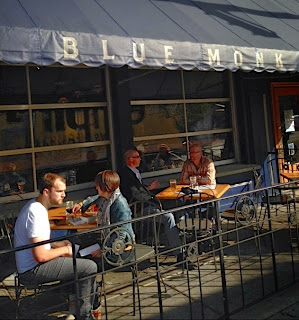 Blue Monk was one of 12 Elmwood Avenue restaurants participating in the 2013 fall Restaurant Week. The week is designed to give customers the opportunity to try elegant dishes at a discounted price that corresponds with the year. Expensive entrees are priced at $20.13. Blue Monk was established in 2010 and with the week coming to a close, it hopes to prove that it belongs with the rest of the upper tier restaurants of Western New York. By Patrick Lawler and Joe Sarro
Posted by Bengal News Editor at 7:06 PM

Harvest season has come upon us once again, and local community garden center Urban Roots has all of the farm connections to make this time of year a success.
There are still several weeks left to participate in this year’s annual Buffalo Bites Tour.
The tours, continue through November, are giving visitors and locals alike last opportunities to indulge in the culture of the Elmwood Village.
During the three-hour walking tours, participants journey through Elmwood Village and hear stories of its past.
The tours run 11 a.m. to 2 p.m., Tuesdays through Saturdays and were designed to give people a chance to explore and appreciate Buffalo’s architecture, according the website BuffaloBitesFoodTours.com
Children pay $30 and adults $42.
In addition to sightseeing participants stop at six local eateries including Cole’s Restaurant & Bar, Blue Monk pub and Firefly Cupcakes where they’re given samples of specialty dishes.
As part of the tour, Firefly Cupcakes, located on Elmwood Aveneue and Bidwell Parkway, provides participants with one of its full sized couture cupcakes of any choice
Derrick Reed, senior staff of Firefly Cupcakes, said he thinks the tour is great in terms of promoting Buffalo‘s culture.
“It’s a good way to get to know the city without having to do it by yourself. They’re familiarizing themselves with the area,” said Reed. By Ebony Linzy
Posted by Bengal News Editor at 5:17 PM

Three new proposals for the Millard Fillmore Gates Circle Hospital reuse are on the table and being reviewed by the Kaleida Health offices.