The horses used to pull carriages are referred to as Clydesdales. These horses are actually bred to work, and if they do not work their bodies could potentially suffer mentally and physically.
“It wasn't that long ago that horses were the main mode of transportation, moved goods, and were inextricably linked to people's lives,” Erika Abbondanzieri, owner of Banner Farm, said.
The farm does not only take care of horses that pull carriages, but it is also home to a few retired racehorses, a rescued wild-caught mustang and a pony that came from a neglectful home.
Banner Farm has 120-acres of farmland for the horses to live on. The horses have 24/7 access to a large pasture, fresh water, shelter and hay.
“Every six weeks they go to the farrier to have their hooves trimmed or their shoes reset, and when horses need it, we have the chiropractor out to be sure they are in tip-top shape,” Abbondanzieri said.
The Buffalo area is not as familiar with carriage rides as New York City is. In Central Park, carriages line up waiting to give pedestrians a ride around the city, among the busy traffic within the urban area. The scene is different in Buffalo, which is the reason why horse-drawn carriage rides are not seen as a top priority with the SPCA Serving Erie County.
The SPCA faced a few issues regarding horse-drawn carriage rides and abuse back in 1867, which took part in the creation of the organization. However, since horse-drawn carriages have made a fresh comeback to the Buffalo area, the SPCA does not have much experience dealing with this controversial issue.
The SPCA’s mission is to create a “caring and kind community that encourages fair and humane treatment of all creatures.”
“If we receive a report on local carriage horses being mistreated and abused, it will be investigated without question,” Gina Browning, SPCA chief communications officer, said.
Posted by Bengal News Editor at 9:41 AM 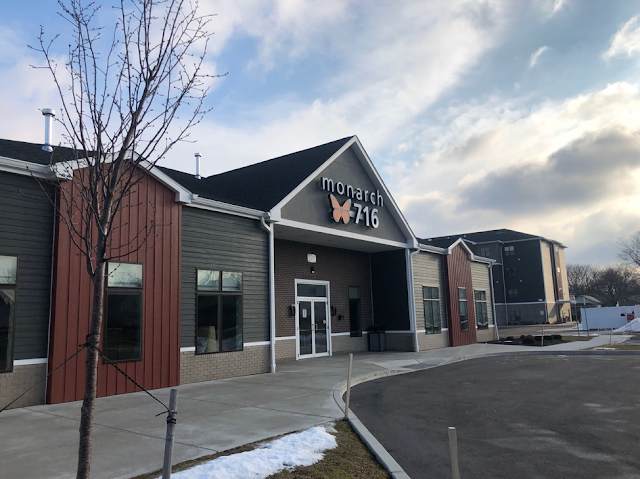 Monarch 716, a student housing complex at 100 Forest Ave. near SUNY Buffalo State, will be auctioned on April 8 after a wave of legal issues. The property was foreclosed last November due to $44 million in unpaid construction bills, plus additional liens and lawsuits filed against DHD Ventures, the building’s developer. Timothy Gordon, vice president for student affairs at SUNY Buffalo State, explained that while the college has no relationship with Monarch 716, his understanding is that the complex remains open and leases will continue to be honored. By Nick Lukasik and Zach Rohde
“Growing up, Elmwood was always kind of the shopping and cultural hub of the city and I feel like even with the renaissance that the city is going through, Elmwood is still kind of the center of what is going on,” Machemer said.

Jeff Allen is the administrator of the Facebook group WNY Vinyl Collective. The WNY Vinyl Collective is a group focusing on the record industry in Western New York, with over 3,500 members.
Jeff Allen, administrator of the Facebook group WNY Vinyl Collective, stated that local record stores play a very important role in the vinyl industry. Allen said he sees the industry focusing on the newer vinyl releases going forward.
“Local record stores are not just a place to buy records, this is where we go to learn about music and meet other people that have the same interests,” Allen said.
Both Revolver Records and Black Dots have created ways to separate themselves from larger retailers who sell vinyl records, such as Amazon. For Revolver Records, it is focusing on the used record market among other things.
Although online shopping is more convenient, Machemer considers record shops to be the best place to buy used records. He also admits that it is hard to compete with Amazon prices for new vinyl, but he has tried a few different things.
“There are a lot of Indie exclusive releases for records on certain color vinyl and certain releases that are only released at record shops. you can’t buy them online and you can’t buy them on Amazon so we try to stock a lot of stuff like that,” Machemer said.
Posted by Bengal News Editor at 6:11 PM