Wintertime is approaching us here on the West Side, and that means the start of the winter market season. Horsefeathers, 346 Connecticut St., started its winter market on Nov. 4 as it introduced new vendors to the family, including BlackPorch Produce, Overwinter Coffee, and Rooted Locally, said Jason Frizlen, head of property management and leasing at Frizlen Group Architects, building owners. The winter market opens every Saturday from 10 a.m. to 2 p.m. and will run through the spring. The Elmwood-Bidwell Farmers Market, corner of Elmwood Avenue and Bidwell Parkway, will tough it out in the cold until it moves indoors on Nov. 25 at St. John’s Grace Episcopal Church at 51 Colonial Circle. Colin Erdle, board member for the Elmwood-Bidwell Farmers Market, said eight of the market’s 20 vendors are new, such as a woman making scarves, a woodworker, and a Somalian sauce maker. The winter market will run every Saturday from 9 a.m. to 1 p.m. until Jan. 13. By Jacob Fyock and Chris Prenatt
Posted by Bengal News Editor at 5:20 PM

Small Business Saturday will be taking place in the Elmwood Village on Nov. 25, which is an event that hopes to shed a light on local businesses that may be overshadowed by big name companies.
At least 12 businesses have been confirmed by the Elmwood Village Association to participate in this event, and many more are promised to participate as well.
Melika Givili, associate of the lingerie boutique Jolie Jolie, 814 Elmwood Ave., talks about why shopping at small boutiques may be better than shopping at larger name brand stores.
“The whole industry within retail shops, especially in the mall, are just shutting down,” Givili said. “They’re becoming extinct. It’s nice to go out to boutiques and walk back out into the fresh air. You’re not just walking around a mall aimlessly looking around.”
To celebrate Small Business Saturday, Jolie Jolie will be offering 15 percent off all purchases.
Ashley Smith, executive director for the Elmwood Village Association believes this event is a smart alternative for people who do not like shopping on Black Friday.
“Small Business Saturday isn't driven so much by deals or sales like we've come to expect from box stores or chains,” Smith said. “The Small Business Saturday experience is much more focused on community and interaction. The service, care, and personality are more important.”
Smith believes Small Business Saturday is a great way to start celebrating the holidays.
“Small, local retailers and stores form an integral part of the community we live in,” Smith said. “The holiday season brings people together through acts of gathering, gift-giving, and sharing.” By Alyssa Brannigan and Taylor Carruth
Posted by Bengal News Editor at 4:40 PM 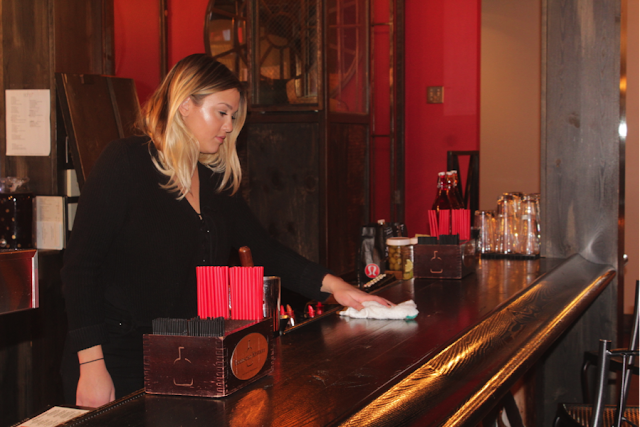 The West Side and Black Rock-Riverside Neighborhood Housing Services, 359 Connecticut St., held its monthly homebuyer education course recently.  Homeownership Counselor Lauren Jednak, right, teaches the class not only to people interested in living on the West Side but also to people looking to buy a home around Western New York. The class is for first-time homebuyers and is highly recommended, or in some cases even required, by banks to receive a mortgage loan. “We spoke about preparing for homeownership, like getting your credit score where it needs to be,” Jednak said. “Banks want to see a 620-credit score in order to get a mortgage.” The class costs $65 to attend, and residents who plan on going need to pre-register as spaces are limited for the course.  Lackawanna resident Tamra Hughes, left, and other residents of Western New York completed the class and received a certificate of completion for the course, which is valid for one year.  Jednak mentioned that the  nonprofit organization not only teaches this class but offers free homebuyer orientation courses. The orientation courses are held to answer any questions that residents have about buying homes. The education courses are held once a month, and the orientation classes are twice a month. The next orientation course will be on Nov. 22.  The last homebuyer education course of 2017 will be on Dec. 2.  Homebuyer education classes will resume once again monthly in January 2018.  By Alyssa Brannigan and Talyor Carruth

Posted by Bengal News Editor at 6:59 AM

The Community Supported Agriculture program came to an end recently for the 5 Loaves Farm, 1172 West Ave., and Assistant Farm Manager Seth Brown could not be more pleased with the results from this season. The CSA season runs from the first week of June through the last week of October. Members of the program receive a supply of vegetables and fruits that are grown at the farm, and are able to pick up their share every Thursday from 4-7 p.m. throughout the season.  At the beginning of each season, members of the program pay $450, which averages out to be $20 a week for a large share portion, or $225, which is an average of $10 a week for a smaller portion. “Our goal was to give them 10 percent more produce than they paid,” Brown said. “The large share, they pay $20 a week, we wanted to give them at least $22.50 worth, and they ended up getting an average of $25 worth of produce each week, so we had a really good year.” Brown plans on sending a survey to the members of the program to ask them what they did like as far as their shares of vegetables/produce went, and what they did not like. After they receive the surveys back, they plan for what they want to grow for next year’s CSA season based on the feedback they were given. By Alyssa Branningan and Taylor Carruth
Posted by Bengal News Editor at 2:51 PM 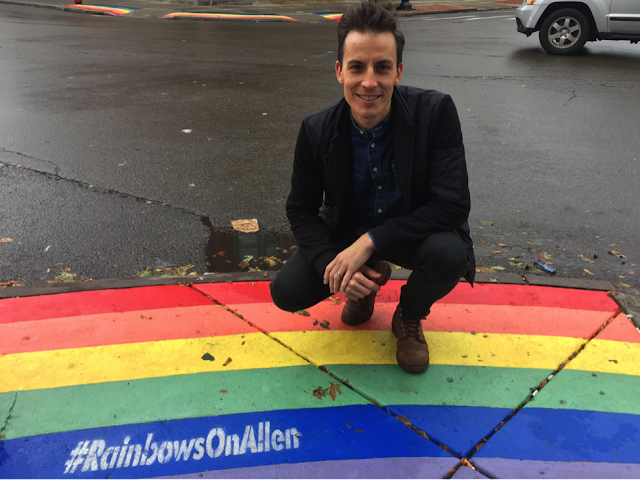 Allentown Association Board President Seth Amman shows off one of his Rainbows on Allen painting, a project meant to celebrate inclusiveness and acceptance of the LGBTQ community. “Allentown has long been seen as a LGBTQ friendly neighborhood in Buffalo and we often see that the rainbow flags are flown for about  a month, which is nice, but people say it’s kind of sad to see them come down,” Amman said. The paintings add a permanent stamp in the community, something that Amman hopes will make people feel secure . “I want people to understand, or get an immediate sense, that it’s a safe , inclusive place. That's always a question more and more with the changing environment and it’s important for everyone,” Amman said. Amman hopes to add more sidewalk paintings, but doesn’t have any set locations due to the everchanging redevelopment of the Allentown area. “It’s a start, things change and happen fast in the city, especially in an area like this where there's so much happening. I think we have to protect what's great about Allentown and I think this symbol offers up that conservation.” #RainbowsOnAllen and #BuffaloIsAwesome are two social hashtags that are etched into the paintings that people can use when they post pictures of the artwork. “The hashtag can travel globally. It talks about the type of community Allentown is, the type of community that Buffalo is and people can interact with them and share their story,” Amman said. By Kelly Khatib and Michael Read
Posted by Bengal News Editor at 12:50 PM

The transformation of School 77 into affordable housing, which began construction in May, is at the halfway mark.
The rehabilitation of the property at 429 Plymouth Ave. is on track for an early spring opening, Marjorie McAllister, project manager, said.
“We are 50 percent complete. We just installed the windows and floors in the building,” McAllister said.
The project is being directed by People United for Sustainable Housing Buffalo, and its housing development company, Buffalo Neighborhood Stabilization Company Inc.
The 90-year-old building will feature income-based housing for residents 55 and older, as well as become the new home for the Ujima Theatre Company. The building will include offices for community programs, including PUSH, which will be consolidating its offices and moving into the new building upon completion.
The $15 million project is the largest PUSH has taken on in its 13 years of operation.
PUSH started the project after three years of advocating and collecting community input. Local residents decided affordable housing for senior citizens is what the neighborhood needed.
In addition to the School 77 project, PUSH is working on several other affordable housing units on the West Side. By Zachary Memmott and Khlaid Terrell
Posted by Bengal News Editor at 6:36 AM 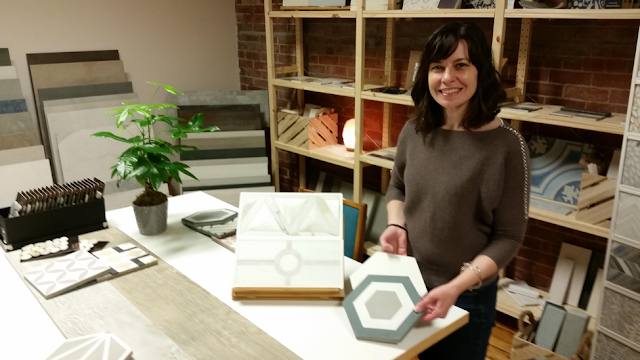 When Leslie McManus returned to the West Side to be with family, she planned on bringing beauty to residents’ homes. “The goal was to come back to Buffalo and open a store on the West Side,” McManus said. “It was a perfect fit for Buffalo and I wanted to bring everything I learned … to Buffalo.” McManus opened Blueprint Design Studio in September in the Horsefeathers building at 346 Connecticut St. Blueprint offers a variety of designs that create artistic and unique tiles for housing. The store also provides tiles that are organic. She sells cement tiles that are a renewable resource and environment friendly. Her mother’s inspiration led her to get involved with visual arts and motivated her to make it a career. “I grew up around a mother who was extremely creative with our house and she took my opinions to heart, even at 12 years old,” McManus said. She started off her career by attending the Buffalo Academy for Visual and Performing Arts. From there, she took her craft to the University of Buffalo and received a degree in fine arts while also obtaining a graduate degree in interior design at the New England School of Art and Design. With two degrees under her belt and having family living in the Queen City, she decided to come back with her two daughters because she wanted them to be around her family more. By Jacob Fyock and Chris Prenatt
Posted by Bengal News Editor at 5:56 AM

Explore Buffalo gets you inside in winter

Explore Buffalo’s new season of tours will move inside  through April 30, with a series showcasing the interiors of historical buildings and bus tours around the city.


The Gilded Age Series, which includes the Delaware Avenue Mansions tour, teaches individuals about the history of the homes occupied by some of Buffalo’s wealthiest residents.


Explore Buffalo offers over 70 different tours throughout the year. There’s a tour available that fits everyone’s schedule.
The next season for walking tours begins in May and will feature a new tour called, The Niagara Street Industrial Heritage Tour.


“Niagara Street was a center of industry with the Beltline Railroad and the Buffalo River,” said Chuck LaChiusa, board president and founding member of Explore Buffalo.


Explore Buffalo has 100 docents and volunteers who provide historical insight as they lead a variety of tours around the city.


Tickets are priced based on Explorer Pass holders, students and general admission. The initiative of the season was the Explorer Passes, which allow people to take unlimited walking and spotlight tours, and attended unlimited discussions. By Tatiyana Bellamy and Edwin Viera