West Side organizations and businesses are doing their best to ensure that people living on the street can be as warm as possible. New to You and Friends of Night People are among those that are providing some warmth in the area's frigid temperatures. Full story by Matt Bove and Gabrielle Mediak
Posted by Bengal News Editor at 3:58 PM

Thanksgiving Eve is make or break for bars

Black Friday can make or break the year for retailers all over the country, but for bars and clubs on the West Side, the moment of truth comes  on Thanksgiving Eve.
The night before Thanksgiving has been deemed the biggest party night of year, but for bars and clubs it is far more important than most may think.
“The bars make double, sometimes triple the amount they would on a normal weekend all in one night,” said Zach Grimm, bouncer at Social Night Club, 228 Franklin St. “Without this night I don’t think the bar would make it through the holiday season.”
Capitalizing on the first time college students come back home for Thanksgiving break is vital for the success of the bars and clubs. Many places on the West Side will raise their cover charge upwards of ensuring that they make the most out of the craziest night of their year.
“Clubs will increase their cover charge because they know how many people will come through the doors,” Nick Iacona, a disc jockey at at Purple Monkey, 236 Delaware Ave, and Pure Night Club, 75 West Chippewa St. said. “People will pay to participate in the madness because it is the biggest party night of the year, so bars can get away with charging more.” By Matt Bove and Gabrielle Mediak
Posted by Bengal News Editor at 11:50 AM

The Salvation Army, 187 Grant St, is holding its annual Thanksgiving services and turkey dinner for the West Side community on Thanksgiving Day.

Services will start at 11 a.m. and dinners will start to be fed at 11:30 a.m. on Nov. 28.   Anybody is more than welcome to come eat or volunteer to cater the event or even to lend a helping hand in the clean up. The dinner is free of charge.
Tops, Wegmans and individuals donated multiple turkeys and other foods to help feed people in need of a holiday dinner.
“This event not only helps families, but it helps the community come together,” a Salvation Army official said. By Patrick Lawler and Joe Sarro
Posted by Bengal News Editor at 2:33 PM 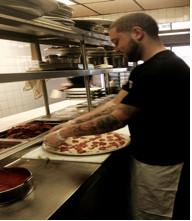 The Elmwood Village Association’s EBT Benefit Exchange Program continues to assist the large immigrant population on the West Side with purchasing fresh produce at the Elmwood-Bidwell Farmers Market.   The market is open every Saturday from 8 a.m. to 1 p.m.  until mid-December. By Sade Mckenzie and Shytisha Taylor
Posted by Bengal News Editor at 1:10 PM

People are tuning in to the Major League Soccer playoffs on ESPN and NBC by the thousands, but for those on the West Side, there is playoff soccer closer than they may think.
Every college on the West Side — SUNY Buffalo State, Medaille College, D’Youville College and Canisius College — has soccer teams competing for their respective conference championships this month.
While Buffalo State soccer has struggled lately, its fortunes appear to be changing. Both the men’s and women’s teams made the playoffs for the first time in years, with the men finishing the regular season with a 9-9-1 record, and the women with an 11-5-2 record.
"Buffalo State men’s soccer has changed its reputation," junior forward Christian Warchocki said. "We went from being the easiest team to play in the SUNYAC [State University of New York Athletic Conference] to making the playoffs."
Although the men had an impressive year, the women’s team has earned a first round bye, and is a favorite to win the SUNYAC championship.
Medaille’s men’s team finished with a record of 12-7-1 and is the No. 1 seed in the Allegheny Mountain Collegiate Conference (AMCC) tournament.  D’Youville women’s soccer finished with an 11-4-3 record, and is also preparing for the upcoming AMCC championships. Both are among the favorites to compete for their league championships.
While Canisius’ women’s team’s season ended with a playoff loss on Nov. 1, the men’s team is preparing for the upcoming Metro Atlantic Athletic Conference (MAAC) tournament. The men’s team finished the regular season 6-8-2, while the women’s squad ended with a 6-14-1 record.
Posted by Bengal News Editor at 2:59 PM

The murals that have been added to the landscape in West Side business districts give residents a chance to look at themselves and their surroundings in a new and artistic way. Full story by Sean Dwyer and Youleidy Vega

Posted by Bengal News Editor at 6:24 AM 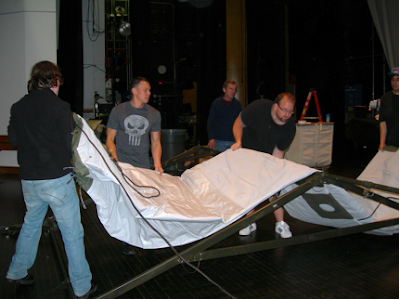 Residents of Ardmore Place are finding that the historic brick they rallied to keep uncovered is more than they bargained for.
From afar, the street looks smooth and even. But a closer look reveals crooked, uneven bricks and gaps every ten feet filled with loose asphalt.
In July, the city ripped up the road to repave it. When residents saw the exposed red brick underneath the pavement, they pushed the city to allow them to keep it. Now, that initial excitement seems to have faded.
“It’s not the way things are today,” Danelle Castiglia, 68 Ardmore Place, said. “It’s fun to hang on to nostalgia, but I don’t think it’s practical. There’s a reason they paved it [40] years ago.”
“It’s pretty to look at,” Castiglia  said. “But I don’t think it’s going to be practical.”
Kenneth Guidie, whose girlfriend lives on Ardmore, said he doesn’t like that skateboarding or rollerblading on the brick is difficult.
“The road is bumpy, you have to drive really slow when you’re driving over it,” Guidie said. “It’s noisy, that’s another complaint people have been having.”
With winter approaching, residents are worried that snowplows won’t be able to go down Ardmore without scraping the road, and that salt might erode the recently discovered red bricks.
“I like the feel that it brings, the look of it,” Guidie said. “Other than that, I don’t care for it. That’s going to be a mess if they don’t raise their plows up a couple of inches, like they should.”
Posted by Bengal News Editor at 6:48 PM

Buffalo didn't get ranked 14th in the nation for the number of bicycle commuters for nothing. When the weather turns brisk and the snow begins to fall, hearty,  year-round cyclists decorate bike lanes with tread marks. Full story by Lauren Coppola and Samantha Wulff.
Posted by Bengal News Editor at 3:46 PM

IN DEPTH: Evolation Yoga aims to relax the West Side

A yoga studio on the West Side turns up the heat on relaxation. Full story by Sade Mckenzie and Shytisha Taylor.
Posted by Bengal News Editor at 9:59 AM

IN DEPTH: Live comedy brings big laughs to West Side

A troupe of students at SUNY Buffalo State delivers laughs for free to growing audiences every Friday night. Full story by Matt Bove and Gabrielle Mediak
Posted by Bengal News Editor at 8:31 AM

Farmers' market goes inside for winter

By Ebony Linzy
Bengal News West Reporter
With winter just weeks away, the Elmwood-Bidwell Market is going inside.
The producer-only market  set up shop Nov. 2 inside the recently renovated Horsefeathers Market & Residences and will be open until May 3, 2014.
Located on Connecticut and Normal streets, Horsefeathers will house the winter market, which would extend the season of the weekly outdoor farmer’s market making it year round. It will be open every Saturday from 9 a.m. untill  1. p.m.
The market  gives people an opportunity to purchase goods directly from the producers themselves. Usually situated inside the park on Elmwood Avenue and Bidwell Parkway, the summer market has 38 vendors and runs from May through November.
Composed of 14 participating vendors, the winter market will offer a collection of products including fruits and vegetables, homemade doggy treats and soaps.
The farmers’ market vendors will be set up among permanent retailers including the Martin Cooks Restaurant, and the Pasta Peddler.
Marketing manager Joe Kirchmyer  hopes that the overall summer experience will extend into its winter season and that it will see success.
“The market is a great community gathering place,” Kirchmyer said.

Project coordinator Brian Milbrand and volunteer Amanda Matthews discuss the debut of the Front Yard art exhibit, which projects videos  on the Burchfield Penney Art Center located at the corner of Elmwood Avenue and Rockwell Road. The video exhibit is controlled by the weather and creates an opportunity for local artists to display their work to Elmwood commuters, 365 days a year. By Sean Dwyer and Youleidy Vega
Posted by Bengal News Editor at 12:23 PM

By Sean Dwyer and Youleidy Vega
Bengal News West Reporters
A coalition of Buffalo organizations is awaiting word on receiving a $3 million grant from The Open Society Foundations for urban development.

PUSH Buffalo, Partnership for the Public Good, Voice Buffalo and Coalition for Justice combined to create Open Buffalo, which applied for the grant in April.
Open Buffalo’s plan includes improving the city’s worker equity and workforce development, increasing education and training for youth and increasing opportunities for local businesses.
The Open Society Foundations’ goal is to build vibrant communities and promote open participation while holding government accountable, according to its website.
Organizations in 16 cities applied and Buffalo was one of eight cities that advanced to the semi-finals. Each semi-finalists received $100, 000 for planning.
The planning process, which ended in September, consisted of the cities putting together a proposal of ideas and potential changes that will help improve their community. The cities that show that they are most capable of efficiently using the money will receive the grant, said Rahwa Ghirmatzion, PUSH Buffalo’s development director.
The foundation has until December to decide which cities will be awarded the implementation money. They will receive $1 million yearly for a minimum of three years.
Ghirmatzion said that they have not thought about how they will implement their plans without the foundations'  support but would still continue to pursue their plans.
Posted by Bengal News Editor at 11:03 AM

Buffalo Vineyard City Church is on a mission to bring farming into a city neighborhood with its 5 Loaves Farm. Volunteers, which include many area school students, help work the farm and harvest its bounty for area residents.  Full story by Ebony Linzy
Posted by Bengal News Editor at 6:49 AM

Two West Side merchants believe there's a place for good old-fashioned books and vinyl records, despite where technology is going. Full story by Caitlin Kupiec and James McDonald
Posted by Bengal News Editor at 6:25 PM