Buff State paddles back into competition 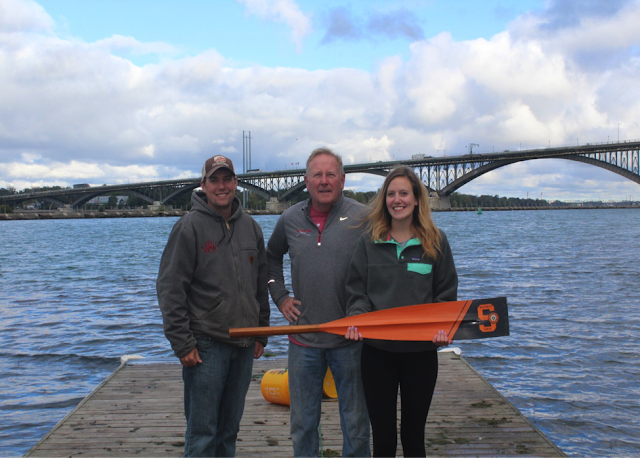 Ed Corr, center, the president of the West Side Rowing Club, is opening the doors of the club for SUNY Buffalo State. The college will be paddling its way back to rowing for the first time since 1974, under the guidance of coach Mike Cute, left. Willow Greene, Buffalo State rowing club president, has been working closely with West Side Rowing to get students on the water. She believes that Buffalo State will feel at home. “West Side fosters an awesome tight-knit community of rowers,” Greene said. “Buffalo State is an awesome tight-knit community of students so it just makes sense to me that we would put those two together.” Despite not being on the water this semester, the club has 25 committed rowers, with many others interested. The rowing club is expected to be on the water this upcoming spring. By Zachary Memmott and Khalid Terrell
Posted by Bengal News Editor at 4:59 PM

From left, Beatriz Flores, Erica Leon-Torres and Freddie Pagan, listen to stories from Buffalo residents who have family members in Puerto Rico struggling to get back on their feet after hurricanes Irma and Maria. Freddie Pagan founded Mission Puerto Rico 716, whose mission is to send relief to hurricane survivors in Puerto Rico. On Oct. 11 the organization held its second meeting, at the El Batey Dance Center, 289 Dewitt St. Pagan co-hosted the event with his sister Erica Leon-Torres, director of the Hispanic Heritage Council of WNY, and Beatriz Flores, community leader “We need money donations, we need canned food and batteries, we need generators but we really need volunteers here and in Puerto Rico who are serious about doing this,” Flores said. The group set a long-term fundraising goal of $30,000 to $40,000  for supplies. Attendees included business owners, and individuals interested in raising money, including some who have already sold food, wristbands and T-shirts. While the organization is dedicated to sending relief to Puerto Rico, it also assists in the relocation of families in Buffalo. People who are interested in donating can find more information on the organization’s GoFundMe account and follow Mission Puerto Rico 716 on Facebook for updates on future meetings. By Tatiyana Bellamy and Edwin Viera
Posted by Bengal News Editor at 5:52 AM

Monarch 716 steps up security after crimes

Monarch 716 is an apartment complex located at 100 Forest Ave that opened in August. Since then, multiple crimes have occurred around the property causing concern for many residents. The Buffalo Police Department did not respond to multiple press inquiries, but according to crimereports.com, there have been several crimes around Monarch since Aug. 13 including thefts, assaults, and robberies . However, residents have noticed that management has recently stepped up their game. Monarch now has security patrolling the property at night. They have also incorporated a sign-in sheet at the front desk to register guests coming into the complex. Management at Monarch 716 declined to comment. By Jacob Fyock and Christopher Prenatt
Posted by Bengal News Editor at 3:42 AM