Phylicia Dove opened the Black Monarchy boutique  last year on West Utica, where her mission, she says,  is to “bring the world to Buffalo.” She listens to advice from the community on how she can incorporate cultures that are not represented in the area. West Side residents even give the boutique items to sell to make sure their culture is shown. The boutique has partnered with many organizations. Dove partners with Let There Be Light International, which gives a profit from the store to Uganda where it will provide families with solar power for two years. By Kaylin Padilla and Roshea Robinson
Posted by Bengal News Editor at 7:51 AM 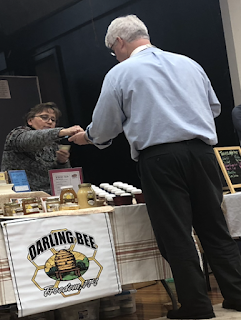 Keelan Darling, from the Darling Bee, a Freedom, N.Y., sold her natural chemical free honey-based lotions and lip balms during a recent Saturday at the indoor version of the outside Elmwood Village Market. The market has been moved from its home on  Elmwood Avenue and Bidwell Parkway to  St. John’s Grace Episcopal Church at 51 Colonial Circle. Susan A. McCartney, event coordinator of the Elmwood Village Holiday Market, says the indoor market will be open from 9 a.m. to noon, Saturdays until Dec. 29. By Talisha Hernandez and Isaiah Small
Posted by Bengal News Editor at 8:33 AM

PUSH Buffalo, a local sustainable housing non-profit organization, stood outside HEAP (Home Energy Assistance Program) on its opening day, protesting that the federal energy assistance program is a Band-Aid solution to Buffalo’s real energy problems.
Geovaira Hernández, climate justice organizer at PUSH, was one of those people out there talking to community members in line about issues, over hot coffee.
“If you think you can’t pay your utility this month, you get it set off, you get a late payment imposed and then you also get a reactivation fee imposed,” Hernández said. “Why? When I wasn’t able to even pay my bill in the first place?”
In April, the Partnership for the Public Good published a report for the Truth Commission on  Poverty in Western New York called “Poverty in Buffalo: Causes, Impacts, Solution.” The report found that HEAP “alleviates” problems, but only helps a portion of households facing imminent heat turnoff.
The study cited that nationwide, 79 percent of tenants pay their own utilities, giving landlords fewer “incentives to upgrade to energy-efficient heating or cooling systems.” In Buffalo, that problem is even greater, the study says, because 59.3 percent of homes are occupied by renters, compared to a national average of 34.9 percent and local energy costs are “already 30 percent above the national average.”
Hernández would like to see the city create an office of sustainability and a community advisory board made up of disadvantaged community members, as well as make a city-wide commitment to use 100 percent renewable energy.  By Francesca Bond and Alex Silvia
Posted by Bengal News Editor at 8:01 AM

Bazaar to be part of senior meal program