The Crucible comes through for artists

It’s been over a year since the initial shut down due to the COVID-19 pandemic and it has taken a toll on the art industry. Galleries had to close and artists had to find other ways to feature their work. One establishment decided it didn’t want to take a pause on promoting local artists. 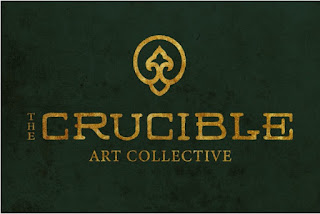 The Crucible Art Collective, 334 Connecticut St., is a tattoo parlor-art gallery hybrid that features a monthly, local artist who displays their collection in the gallery, while promoting and selling their work.

The Crucible is kicking off spring with its April artist, John Latona, a graduate of art education and fibers and textiles at SUNY Buffalo State.

Latona, who is a graphic design teacher in the Buffalo Public Schools system, found refuge during the pandemic because he was able to use his struggle with anxiety and depression and put it all into creating new, different artwork.

The installation, called Deflated, is made up of a set of three-dimensional prints that include balloons and common household items. Latona said that the collection represents a feeling of “isolation and loss of intimacy” brought on by the pandemic and the connection between that and the LGBTQ+ community. He will be donating half of his proceeds to the Gay and Lesbian Youth Services of Western New York.

“It is so cathartic working on this collection,” Latona said. “I am turning something bad into good and I am donating half of my profits to GLYS.”

When The Crucible opened in June 2019, owner Taylor Heald and gallery curator Alicia Malik wanted the young, new art community in mind when it came to the gallery side of business.

“A lot of galleries in the area try to stay traditionalist when selecting their art shows, but then you’re not linking to the younger artists who need a place to start,” Malik said.

She and Heald loosely began their monthly art shows, but only featured the friends and employees of The Crucible since it had just opened.

Malik handles everything from booking the artists to maintaining the art wall and even greeting and handling the appointments on the parlor side. As the gallery became more popular, Malik had more artists making reservations for art openings, but when the pandemic hit, she gave the artists a choice to go digital or move the date of their opening.

Artist Ashley  Johnson chose to keep her planned art show for December through January this year, but there was no in-person reception. Instead, her show was virtual.

“Unfortunately, my show was up during the worst months, so the whole thing ended up being virtual,” Johnson said. “I did sell some work, but it’s never the same as an in-person event. Art is always better in person.”

Although her show was not in-person, Johnson said that she didn’t do this for exposure and encourages other artists to stop giving their hard work away for that reason.

“Stop focusing on exposure and think about networking and being supportive in the creative community instead. Go to shows and meet other artists. Hype your friends up by sharing their work with proper credit,” Johnson said.

Malik said the biggest thing they wanted to push during the pandemic was to stay busy.

The first initiative they thought of when everything shut down was the “Five by Seven Art Exchange.”

In April of last year they allowed any artist to send in a 5-by-7 inch work of art. Whatever they received, they displayed on the gallery wall and posted it to The Crucible social media pages. After some time, Malik sent the artwork back to the artists “blindly,” so each artist got back someone else's work.

“This was the first thing we did to keep up with the artistic side of things and get people involved and engaged while everyone was shut in,” Malik said.

Since being able to feature their monthly artists again, the parlor and gallery encourages strict social distancing guidelines.

“It’s still very important to us that everyone, including the artists, feel like this is a safe space,” Malik said.

The gallery charges $200 a month to artists to display their work but has a lower price for art students to make it more accessible. As far as sales go on the artwork, they only take 25 percent rather than the standard 40 percent.

“We found a way to keep business going on the parlor side and maintain the ability to promote young, aspiring artists without the worry of heavy expenses that you would find at other galleries,” Malik said.