Neighbors take to streets to pick up trash

As the snow melts away, a new problem is revealed. Trash covers the streets and lawns of the West Side. Citizens have taken it into their own hands to get neighbors together and pick up their streets.

Block clubs and other individuals have made it an event and social gathering to come together and pick up trash around their neighborhood.

Elaine Grisanti from the WestSide Business and TaxPayers Association  saw the need to get rid of waste on Grant Street. After protests on Grant Street near Lafayette Avenue, there was an enormous amount of litter that filled the streets. Grisanti along with others, gathered people together to get rid of it all.

“We started to bring community together and clean up the street after the protesters. After we did this, a ton of people showed up and it was really a great community spirit,” Grisanti said.

After this, many people communicated that they wanted to continue the effort, which sparked a monthly event.

“Once a month, at the last Sunday of the month, we hold a ‘trash mob.’ We pick a different place in the community. It’s not just the point of picking up trash, it’s getting to know your neighbor and your community,” Grisanti said.

The association will be putting on an Earth Day clean-up competition on April 22. All you have to do is go outside, pick up trash, take a picture of it and you will be entered into a raffle for prizes.

A study done in 2018 illustrates just how much trash Buffalo consumes each year.

In 2018, there was 150,024 tons of landfill trash alone. Curbside recycling resulted in 30,882 tons. As waste collectors pick up people’s trash, some gets left behind and it’s up to citizens to get rid of it.

Some have gotten fines for having trash on their abutments. Renee Asher noticed the trash on her street and didn’t want her or her neighbors to be fined, so she took matters into her own hands.

“I went around to each one of my neighbors houses and put an envelope at their door, asking to come out during certain days to participate in cleaning up our street. There were about 20 people that showed up,” Asher said.

Asher stated how it took them about 10 hours just to clean up five houses and they still have about 10 houses to go. She mentioned how there’s a vacant lot near her that has a huge amount of trash. Kids play there all of the time and it’s a big concern of the community to get rid of it, they are planning on going to that lot next.

“It was really all well-coordinated about being safe with Corona but really we wanted to give back to our community, especially our street we live on. No one else is going to pick it up for us. It was really fun and just brought people together,” Asher said.

Another community member, Deborah Williams shared the same concerns of trash piling up on her street.

“If you don’t want to have garbage out front of your house, you have to pick it up. I mean there’s just no other choice. It’s not yours, you didn’t put it there, but you want to take pride in your neighborhood,” Williams said.

Williams is a part of the Auburn-Crossroads Block Club that shares flyers with people when they see the need for picking up. She said how everyday she sees at least one person who throws something on the ground.

For a small annual fee, the Tool Library located on West Northrup Place lets you borrow tools and other items that one might not want to buy for a lifetime. They have garbage pickers and other tools available to clean up the streets.

The City of Buffalo has a scheduled bulk trash pick-up for all of 2021. 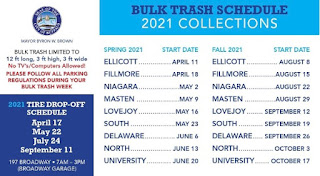 “If you reach out to your community, your community will be there for you. If you don’t reach out and you never say anything and never ask, your problem will never be resolved,” Asher said.