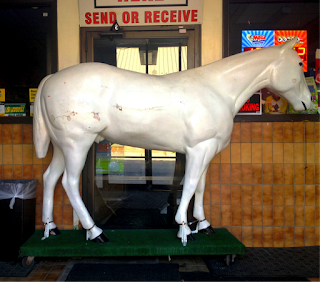 By Michael Mazzuto
and Mike Provenzano
BengalNews Reporters
It may not be Napoleon’s legendary white horse at the Battle of Waterloo, but the white horse in front of Frontier Discount Liquor & Beverage   is famous in its own right.
The building’s original owner installed the horse at 121 Grant St. when it opened in 1974.  He has since sold the property to Bill Mackewitz and the horse came along as a package deal. The horse has since been refurbished with a new base and a fresh coat of paint.
“People like it,”said Lakhi Singh, manager of Frontier Liquors. “We still bring it inside at night though, you never know what could happen.”
Should you pass Frontier and notice the horse is missing, don’t worry. It isn’t the work of vandals.  Frontier Liquors often rents the horse out to local schools that wish to use it during events.
The nameless horse was loaned out to McKinley High School over the weekend.
“I don’t know what they use it for, but it always comes back in one piece,” Singh said.
Being associated with Frontier Liquors doesn’t stop the horse from helping the Cricket  location and a convenience store located next door to entice customers. Mackewitz also owns both stores.
According to Singh, the horse may not be the exact reason people are coming to the businesses but perhaps it may be a good luck charm that protects the stores overnight.
Posted by Bengal News Editor at 12:29 PM